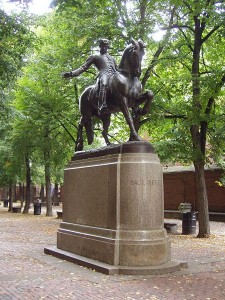 Boston’s North End / Waterfront Residents’ Association will be hosting a public fair on April 29 from 12 – 4PM at the Paul Revere Mall on Hanover Street.  This fair is being held in honor of sculptor Cyrus Dallin, his Paul Revere Monument, and the Paul Revere Mall known to locals simply as The Prado, designed by Arthur Shurcliff and Henry Shepley.

The NEWRA will present a series of lectures on Dallin, Shurcliff, and others who were responsible for creating and preserving this local treasure, among the most visited and photographed sites in the nation.  Other historical presentations will focus on Paul Revere himself, and on the history of Boston’s North End neighborhood. Members of the Cyrus Dallin and Paul Revere families are scheduled to attend.

In addition, the Old North Church will host a related lecture on Thursday, May 17th at 7:00 PM providing more in-depth historical review and an opportunity for public discussion. The featured speaker will be Rebecca Reynolds, formerly of the Museum of Fine Arts, Boston, who specializes in American sculpture. Reynolds’ talk will focus on Dallin’s 58 year quest to erect his Paul Revere sculpture in Boston.

To find out more about these events, the historic North End of Boston, and the amazing North End real estate presently on the market, contact CL Waterfront Properties today.