2015 was a great year for the economy not only locally but nationally as well. The country added 2.3 million jobs and unemployment has fallen below 5%. Here in Massachusetts, we saw an economic surge not seen since the 1990’s. Especially in Eastern Massachusetts we have seen first-hand how strong the economy has become. Anyone driving in or around Boston will notice a skyline filled with cranes and new luxury towers being built all throughout the City. With the job rate steadily growing here in Boston, developers are in a competitive environment to grab land wherever available and start building. In the City, we have witnessed the price of real estate continually rise and, in many cases, prices have reached or exceeded the high water mark just prior to the recession of 2008. The strength of the economy was no stranger to the Waterfront in 2015 with the average sales price of a home being just under $1.2M. The average price per foot in 2015 was $890/sf. in comparison to $844/sf. is 2014 and $760/sf. in 2013. This is a pretty impressive jump in only two years to see the average price per foot increase by more than 10%. In 2015 many of the luxury Waterfront buildings, including Rowes Wharf, Burroughs Wharf  and Battery Wharf, saw properties selling for as high at $1,800/sf. 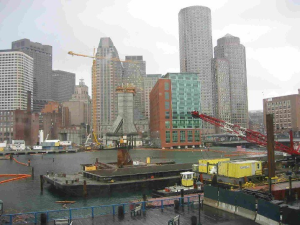