The fair winds and high seas have carried a boat, a very big boat, to our docks this week at Yacht Haven, Commercial Wharf.  In fact, it is the largest private yacht on Earth, called Eos, that found port here on the North End Waterfront.  Named after the Greek titan goddess of the dawn, this three masted rigged schooner at 305 feet long with 200-foot masts is a magnificent sight to behold.

The vessel was once owned by now CEO of IAC/Interactive and creator of Fox and USA Broadcasting, Barry Diller, but today’s owner is unknown.  It hit the  seas in 2006, has a crew 21-man crew and valued at more than $150 million.

The ship has visited a number of ports along the North Atlantic coast this summer at such locations as Nantucket, Provincetown, and Martha’s Vineyard, to name a few.  For more pictures and info about the Eos, visit MarineTraffic.com. 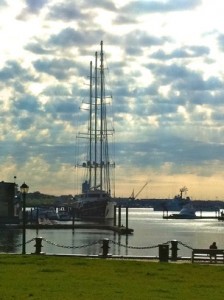