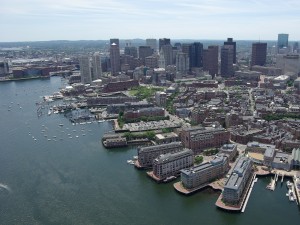 The local real estate market has been very active during the past six months. Much of this action has taken place here on Boston’s Waterfront. Below, find a table that displays the average price per square foot for some of the more popular buildings along the Waterfront:

Here are some details on our beloved Waterfront buildings:

Battery Wharf: The Residences at Battery Wharf consist of 104 apartments. Battery Wharf is the home of the Luxury Fairmont Hotel and enjoys full services, a fitness center, fine dining and Exhale Spa. This property is located on Boston’s Harbor, steps to the historic North End and minutes to Downtown Boston, Faneuil Hall, The Garden and all major transportation points. Battery Wharf, which got its certificate of occupancy in 2008, has now sold all of its original units.

Commercial Wharf: Commercial Wharf is a five-story granite building consisting of 94 units. Built in 1832 for warehousing to and from the Far East, this property was converted into condominiums in 1978. This property is best known for its purest views of Boston’s skyline and harbor. There is Exclusive-Rights parking. It is also the home for the Boston Yacht Haven, and marina slips are available. Throughout the past six months, there have been four sales and two homes are currently under agreement at Commercial Wharf. This strong activity, coupled with the newly upgraded hallways, has made Commercial Wharf very desirable.

Harbor Towers: Harbor Towers I and II were designed by I.M. Pei in 1972 with an eye toward capturing the finest views of Boston Harbor and the city skyline from each unit. There are 312 units in each of these 40-story buildings with eight units on each floor. Services include 24-hour gated security and concierge, seasonal harbor-side swimming pool, renovated and furnished lobbies and on-site management. Harbor Towers has multiple units that are currently under agreement. When these homes close, the average price per square foot for these towers should experience an encouraging jump.

Lewis Wharf:  Lewis Wharf was built in the 1830’s as a major shipping warehouse and converted to condominiums in 1973. There are 90 residential units on four floors and 41 commercial units on the first two floors. These apartments, reminiscent of their historic beginning, have high ceilings, bricks and beams, and most have fireplaces. Building amenities include 24-hour concierge and security, two elevators, a luxurious swimming pool, beautiful gardens and the only rooftop common laundry room in the city with panoramic views of Boston. Rental parking is available. Lewis Wharf, the first building to be converted to condominiums along The Waterfront, continues to be a desirable building for any buyer.

Lincoln Wharf: Formerly the MBTA Power Station, this Historic brick Waterfront building was built in 1901 and converted to condominiums in 1987. This lovely elevator building’s amenities include a 24-hour Concierge, a Fitness Center, an interior Atrium, a lending Library, a Function Room and a Harbor-side Garden. Lincoln Wharf, known for its spacious residences and Harbor views, is located on the primary footpath of the Waterfront between Battery Wharf and Union Wharf, adjacent to Burroughs Wharf, and is just a few steps from The Historic North End, Downtown Boston, and all major transportation points. Lincoln Wharf had 16 sales last year and was recently featured on Chronicle for its role as a “recycled” and revitalized building along Boston’s Waterfront.

The Prince Building: Converted to condominiums in 1974, The Prince Building is an elevator building with 42 condominium units with garage parking. This Historic Building was originally built in 1917 and was the site of The Prince Macaroni Company pasta factory. The Prince Building, known for its dazzling views, is situated on the primary footpath of the Waterfront across the street from Commercial Wharf East and Lewis Wharf and just steps from The Historic North End, Downtown Boston, Faneuil Hall and all major transportation points. This dynamic location is steps from the Christopher Columbus Park and The Rose Kennedy Greenway. Many of the East facing homes at the Prince Building feature spectacular Harbor views. Currently, #6E is under agreement and this is the only property under contract at this time.

Rowes Wharf: The Residences at Rowes Wharf consist of 100 apartments and were built in 1987. They are a unique combination of quality craftsmanship, expansive water views and superb luxury hotel amenities. There is 24-hour concierge services, valet or self-parking, access to the Rowes Wharf health club and pool, and a marina. For the record, the price per square foot last year was $1,063/Sq.Ft. and was the highest on the Waterfront. There were two sales that brought down the prices – one from one family member to another, which was very low.

The Mariner: Converted to condominiums in 1984, The Mariner is a concierge building with 105 residential condominiums with garage parking. Formerly one of the waterfront warehouses, this building was meticulously renovated to showcase its maritime history. This property, known for its fabulous views, greenhouse windows and some of the largest decks on Boston’s Waterfront, also has a fabulous common roof deck with 360 degree views of the Boston Harbor and City Skyline. The Mariner is located on the primary footpath of the Waterfront and is across the street from Union Wharf and steps from the newly developed Battery Wharf and The Fairmont Hotel. It is also steps from the historic North End, downtown Boston, the Financial District, Faneuil Hall and all major transportation points. The Mariner has been one of the Waterfront’s strongest selling buildings in recent months. The Mariner has seen its $/Sq.Ft. jump from $672/Sq.Ft. to $913/Sq.Ft. over the past 12 months.

Union Wharf: Union Wharf is considered one of the most prestigious addresses on The Waterfront. These beautiful granite buildings were built in the 1830’s as warehouses and were converted into condominiums in 1978. This prestigious property is best known for its loft-like, brick-and-beam apartments, beautiful landscaping and “residential-like” feeling. This wharf is comprised of two granite buildings and 23 three-level townhouses. It consists of 89 units, of which 71 are residential and the remaining 18 are commercial/residential. These high-end buildings have 24-hour gated parking, full-time, on-site maintenance, a sea-side heated swimming pool, guest parking and marina slips. One of Union Wharf sales was a gorgeous townhouse which recently sold for $1,127/Sq.Ft.