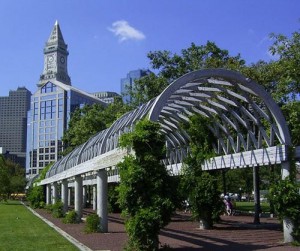 In the heart of Boston’s Waterfront district Christopher Columbus Park is a candidate available for voting in the Coca-Cola “Favorite Park” campaign. Hundreds of Boston residents and non-residents enjoy this park on a daily basis. It’s no wonder why – the park’s location and amenities are ideal for relaxing and enjoying the views of the Boston Harbor.

The Christopher Columbus Park in Boston’s North End was the first waterfront park to be built in the city and originally opened for Boston’s Bicentennial in 1976. A rose garden enclosed by a wrought iron fence and a granite fountain were added about ten years after the park was opened, but the park that people know and love today was updated in 2003 to include broad lawns, a play lot, a spray fountain, performance area, a statue of Christopher Columbus, and a beautiful wisteria-covered trellis.

The Coca-Cola “Favorite Park” campaign is a part of the company’s “America is Your Park” campaign which encourages families to get active outside at local parks around the country. The winning park will receive a $100,000 grant to help improve the area and make it an even better place for families to spend time. Vote for Christopher Columbus Park here to make it America’s “Favorite Park” of 2011!

← No boat? No problem! Fisherman’s Feast in the North End this Weekend →