Taste of the North End

Some of CL Waterfront’s North End residents got a “taste” of the neighborhood at the 17th annual event “Taste of the North End” last Friday, May 6.  The event was attended by over 700 people and featured foods from 37 different restaurants throughout the North End. Some of t 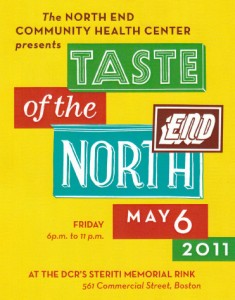 he restaurants including in the tasting were Ducali, Tresca, Lucca, Filippo, among many others.

For the first time in about ten years the event was brought back to the neighborhood for which it represents. In the past the “Taste of the North End” has been held at Saint John School, the Coast Guard base, and the New England Aquarium. This year local residents were pleased to see that the venue was much more open and had returned to its roots. The “Taste” annually raises funds for neighborhood charities, including the North End Waterfront Health Center. Throughout the past 17 years the event has raised over $1 million for these local charities – this year the event raised over $100,000.

The enthusiasm for this event and the North End neighborhood are obvious through the ongoing participation of local restaurants and the attendees who return every year. Included in these habitual “tasters” is State Representative, Aaron Michlewitz, who noted how important the event is for the community when he said, “It shows the uniqueness of our neighborhood and how many great restaurants we have and how many great things we have going on in the neighborhood.” This event truly is a tribute to the local businesses in the North End and a testimonial to its extraordinary community atmosphere.