Hazardous Materials Carriers Routed Around The City During Daylight Hours 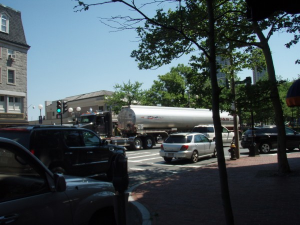 A Gasoline Tanker On Waterfront Streets - image courtesy of NorthEndWaterfront.com

After many years of complaints, appeals, and petitions from local residents and businesses, state government has overturned a 2009 decision to allow HazMat trucks without Boston destinations free use of city roadways. Banned from city streets in 2005 after the opening of the Big Dig and the removal of the elevated expressway, the trucking lobby was able to get the ban overturned in 2009 citing revenue loss due to the added time and expense of routing commercial traffic around the city on Route 128. Trucks carrying hazardous materials are not allowed in any city tunnels, which forced drivers onto the main roads of the city in order to resume travel on I-93.

Trucks which have legitimate business to do in the city are still allowed to do so; using the city as a shortcut, however, is expressly prohibited. The simplest route around the tunnels, if one were to follow the now underground expressway route, is on the surface roads bounding the Rose Kennedy Greenway. Traveling through the heart of the revitalized Waterfront, HazMat trucks pose a serious threat to the safety of the surrounding area, as incidents like last summer’s massive explosion on Route 1 in Saugus illustrated. Local residents and business owners, among them Carmela Laurella and Vito Ascolillo of CL Waterfront Properties, stated as much in a petition which ultimately swayed MassDOT to uphold the daytime HazMat trucking ban.

This move came as wonderful news to those concerned with the safety of the city; gasoline tankers using Waterfront streets to cut through town passed by hundreds of businesses, schools, and residences on their way to their end destinations. Hazmat trucking is still allowed at night, although locals are working hard to end that practice as well. State signage will announce the new route around the city for one month, with the regulation going into effect June 13th. To find out more about the positive impact this will have on Boston’s Waterfront, or to learn Boston Waterfront homes, contact the local experts at CL Waterfront Properties today.