New Development On The Rise In Boston’s Popular Neighborhoods 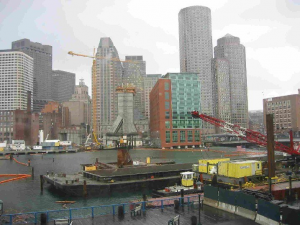 New developments are on the rise in Boston

According to a Boston Globe article* published this morning, area developers are going before city officials this evening to seek approval to build several new residential towers. The creation of these new structures would add more than 1,400 units to the city. Low interest and vacancy rates, coupled with the high lease prices brought about current market conditions, have created an outstanding opportunity for developers to capitalize on large potential profits. Luxury Boston real estate is no longer limited to brownstones and waterfront condos – rental units in luxury developments across town are a hot ticket in today’s economic climate. Developers are eager to take advantage of this opportunity to build throughout the city, and to bring in higher profits than have been possible over the past several years.

The five proposed projects include a 404-unit apartment tower on Stuart Street; 318 back bay luxury apartments in a high-rise at Copley Place; 240 units along the Greenway in rapidly up and coming Chinatown; a 236-unit tower in the Seaport district; and 210 units in prime space on Boylston Street in the Fenway.

Mayor Thomas Menino commented that he and other city officials now receive proposals for residential development projects nearly every day, something he said has not seen for several years. According to George Fantini, chairman of mortgage banking firm Fantini & Gorga, “There has never been a better time in the last 40 years to develop a multifamily project in Boston.”