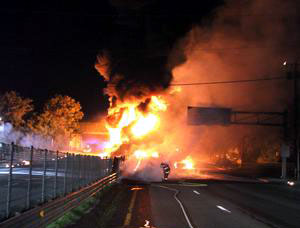 Currently streets going through the North End – including Atlantic Ave., Commercial St., Cross St. and North Washington St. – experience 100+ hazmat trucks each day. The consequences of an accident as bad as the hazmat truck explosion in July would be disastrous in the city of Boston. Many concerned residents of the North End and Waterfront District attended the public hearing held at the Massachusetts Department of Transportation’s headquarters last week to voice their opinions regarding the re-routing of pass-through trucks from Boston streets to highways outside the city such as Route 128. Based upon the 182-page public safety analysis conducted by an independent, Ohio-based research company it has been strongly recommended that the trucks be re-routed to highways outside of the city. While the majority of city officials, including Mayor Menino, support the proposed re-routing of these pass-through hazmat trucks there is opposition from the trucking companies as a result of the increased time and cost that this re-routing would cause.

If you’re living in a North End apartment you should vote to have these trucks re-routed to highways outside of the city. In the upcoming weeks similar public hearings will be held in suburbs such as Quincy, Waltham and Stoneham. Additionally, residents and businesses can comment on the proposal via email at bostonhazmat@state.ma.us until September 23rd. To read the full article about the hazmat truck re-routing click here.