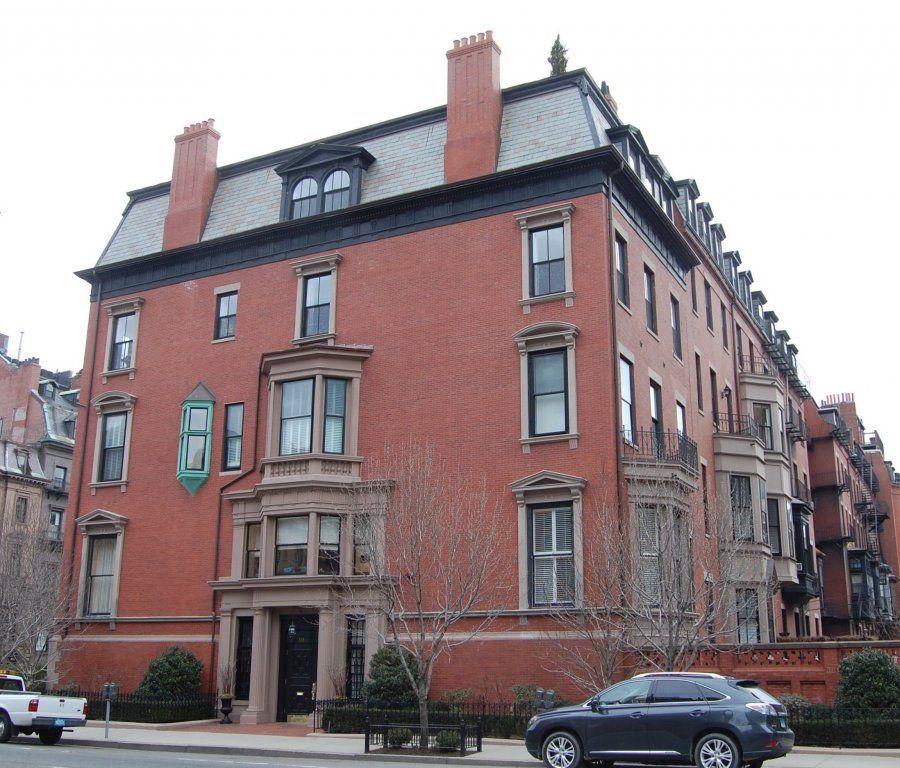 303 Berkeley Street, a restoration of three contiguous historic buildings on the corner of Berkeley and Beacon Streets, and currently has 9 luxury residences. Other amenities of this richly historic property are on-site concierge, keyed elevator access and garage parking. These properties preserve the rich grandeur of Back Bay ambience, at the same time providing all the modern amenities important to today’s most discerning buyers. Many of clients love the history of this landmark property and famous Bostonians that were involved in its early beginnings.

303 Berkeley was built in 1861, originally numbered 147 Beacon until about 1906 when the front entrance was relocated to Berkeley Street.

147 Beacon was one of three contiguous houses (143-145-147 Beacon) built for shipping merchant and real estate investor, John Lowell Gardner. All three houses were owned by him or other members of the Gardner family for a number of years.

By 1864, 147 Beacon was the home of John L. Gardner’s son, Joseph Peabody Gardner, a shipping merchant, and his wife, Harriet Sears (Amory) Gardner. He is shown as the owner on the 1874 Hopkins map.

Harriet Gardner died in November of 1865. Joseph Gardner continued to live at 147 Beacon until his death in June of 1875. After his death, their three small sons lived at 150-152 Beacon with Joseph Gardner’s brother and sister-in-law, John Lowell Gardner, Jr., and Isabella (Stewart) Gardner.

By 1877, 147 Beacon had been purchased by Joseph P. Gardner’s brother-in-law and sister, attorney Joseph Randolph Coolidge and Julia (Gardner) Coolidge.

During the 1887-1888 winter season, 147 Beacon was the home of Caroline (Sturgis) Tappan, the wife of William Aspinwall Tappan. In 1937, Mary Aspinwall Tappan and Rosamond (Dixey) Brooks donated the property to the Boston Symphony.

In about 1906, the building was remodeled to replace the Beacon Street entrance with a grade-level entrance on the Berkeley Street. From then on, the address was 303 Berkeley. Edith L. Coolidge is shown as the owner on the 1908, 1917, and 1928 Bromley maps.

The Coolidges continued to live at 303 Berkeley until his death in July of 1934.

In May of 1935, 303 Berkeley was acquired from Edith Coolidge by Erskine School, which operated a dormitory next door, at 145 Beacon, and also had classrooms, offices, and dormitories at several other locations in the same block of Beacon Street.

In July of 1935, the school combined 145 Beacon and 303 Berkeley into one building, cutting through openings between the buildings on several floors. The buildings continued to be used as a dormitory and dining room for residents of the building.

Erskine School continued to occupy 145 Beacon – 303 Berkeley in 1946, when it suffered a fire sufficiently serious that it required the building to be entirely vacated.

In 1953, Emerson College opened its Samuel D. Robbins Speech and Hearing Clinic at 145 Beacon and probably used 303 Berkeley as a dormitory. The Clinic remained there until about 1961, when it was moved to 168 Beacon. The College subsequently used the property as a dormitory and for offices and classrooms.

In May of 2001, Modern Continental Enterprises purchased 143-145 Beacon and 303 Berkeley from Emerson College. It combined the three buildings into one property, with the address of 303 Berkeley, and converted them into nine apartments. In September of 2002, it combined two of the units and reduced the total number to eight. And in February of 2003, it converted the apartments into eight condominiums.