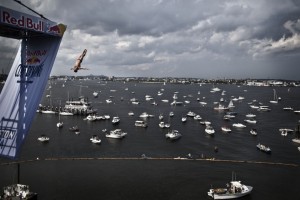 You would typically expect to see a “high-dive” board about 10 meters above the water. However, this past weekend the Institute of Contemporary Art building at Boston’s Fan Pier was transformed into an 80-foot diving board for competitive cliff diving. Cliff diving is usually considered a recreational sport where the diver jumps from a rock formation into either fresh or salt water. While the ICA in Boston is not technically a “cliff” it was the sixth stop for the Red Bull Cliff Diving World Series for 2011.

The Red Bull Cliff Diving World Series is the most prominent competitive platform for the sport of cliff diving. On Saturday, over 23,000 sports fans of Boston were introduced to a completely different type of sporting event where 14 divers from nine countries, between the ages of 25 and 46 competed for their spot in the competition’s standings. Gary Hunt, competing for Great Britain, swept the Boston round by accumulating 463.20 points and solidifying his first place spot with 109 points for the overall competition.

Boston was the competition’s first-ever East Coast stop in the United States. On their sixth stop the divers got to experience Boston Harbor’s “temperate” August water (averaging about 68 degrees Fahrenheit at this time of year). To learn more about the Red Bull Cliff Diving World Series 2011 click here.

Or to learn how you, too, can experience the exciting lifestyle in the Waterfront District – even if it’s not jumping into the Harbor from the top of the ICA – contact CL Waterfront today!