It’s been a long awaited return of the Stanley Cup for Bruins fans throughout New England.  They have loyally stood by their team for 39 years, and now they can once again call themselves, champions.     And what a thrill it has been.  This year’s playoffs were nothing short of epic.  We can’t help but get excited ourselves, and what’s even better, the Cup made it to our own Waterfront neighborhood.  Here are just a couple photos we managed to get around the Union Wharf luxury Buildings during their visit.

Zdeno Chára, team captain of the Bruins, holds the Cup during a visit at the Boston Waterfront. 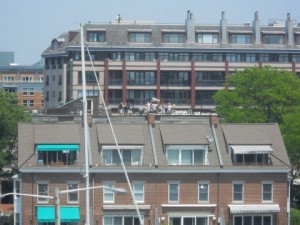